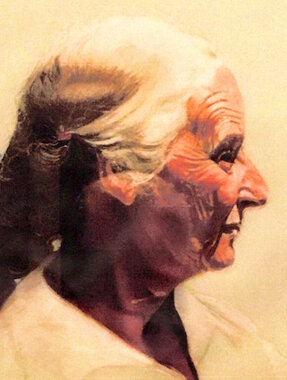 Back to Mary Jane's story

Memorial services for Mary Jane Saeger are 2 p.m. Nov. 23, 2019, at the First Presbyterian Church in Tahlequah. Officiating will be C.L.P. Bonnie Smith. Final arrangements have been placed under the care of Green Country Funeral Home.

Mary Jane grew up and graduated high school in Hagerstown, Indiana. As an only child, family legend has it that she asked her father for a pony, and he helped her set up a Shetland pony farm. She had 17 ponies throughout her young life, and schooled many other horse and pony owners. An avid horse-lover, she rode the 1948 American Saddlebred National Champion, and was a judge for many equestrian events.

Mary Jane attended Christian College in Columbia, Missouri, and graduated with a Bachelor of Arts in religion from Earlham College in Richmond, Indiana, in 1948. At the age of 22, she became the youngest woman ordained as a minister in The United Church of Christ (Christian Church). Her commitment to racial and social justice was demonstrated in the early 1950s in highly publicized lunch counter sit-ins in Richmond, and her volunteer work on a Sioux reservation left lasting impressions that animated her abiding interest in Native American issues. She met and married Armin Saeger Jr., whose association with the American Friends Service Committee brought them to Oklahoma as Quaker missionaries working with the Kickapoo tribe. They moved to Tahlequah in 1960. Armin and Mary Jane were divorced in 1975.

Mary Jane was a lifelong volunteer. She was a Cub Scout den mother, and Brownie and Girl Scout leader. She helped create the "Just Say No to Hate" group, the Tahlequah Curbside Recycling program, and the Interfaith Alliance. She volunteered at the Care Food Pantry and was known for bringing a short essay/reflection for board members to think about. She was the second chair violin for the Northeastern State College symphony orchestra. She served as a Sunday School and Vacation Bible School teacher and sang in the choir at the First Presbyterian Church for 53 years. She chaired Tahlequah's United Way for several years. She also volunteered at the Cherokee Heritage Center. In 2013, at her 87th birthday party, Mayor Jason Nichols proclaimed June 16 as the Mary Jane Saeger Day.

Mary Jane was a horseback riding instructor at Kamp Paddle Trails. She worked at Northeastern State College Library, and was a naturalist at the Murrell Home Park and Western Hills State Park. She also was a homecare aide to several aging clients, and was often seen driving around town in her baby blue VW Fastback. At a height of 5-foot, '4-", people could barely see her behind the wheel.

Mary Jane, our Mama and Mamaw, is well loved and will be missed by all who knew her and enjoyed her many gifts of spirited service.
Published on November 20, 2019
To plant a tree in memory of Mary Jane Saeger, please visit Tribute Store.

Plant a tree in memory
of Mary Jane

A place to share condolences and memories.
The guestbook expires on February 18, 2020.

Restore this Guestbook to share a memory or message of condolence of your own.