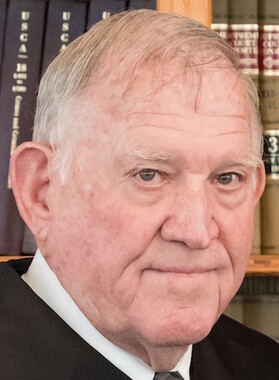 Back to Lynn's story

A celebration of life for Judge Lynn Burris will be held Friday, April 3, 2020, at 2 p.m. at the Cornerstone Fellowship in Tahlequah, Oklahoma, with Pastor Allen Nolan officiating. Lynn's family felt that because of the national current state of affairs, it was only prudent to postpone immediate services.

Lynn loved sports, but he especially loved football. And it was his talent and skill in football that allowed him to receive a scholarship and led to a college degree. He played on the 1955 State Championship team at Muskogee High School, then went on to play on the 1956 University of Oklahoma National Championship team and the 1958 Northeastern State University team, which also won a National Championship. He received numerous football awards and was inducted into the Muskogee Athletic Hall of Fame, as well as the NSU Athletic Hall of Fame. He was one of a small handful of individuals that held National Championship rings at two different universities. It was during his time at NSU that he met the love of his life, Paula (Tarkington) Burris. He also developed life-long friendships and was a proud member of the "Nifty Fifties." This group was a tremendous support during his final weeks of life and continually visited him and brought him much laughter and joy. Their character, loyalty and devotion should be an inspiration to all.

Lynn married his college sweetheart on Aug. 31, 1962. He and Paula then embarked on a journey that took them to Independence, Missouri, where he coached football and track, as well as teaching high school history. It was during this time that Lynn began to contemplate continuing his education at OU Law school. He completed his Juris Doctor in 1968. He served as assistant district attorney in both Sequoyah and Cherokee Counties, as well as a private practice from 1968 to 1973. He held the position of associate district judge from 1973 to 1995. And he was first appointed to the Cherokee Nation Judicial Appeals Tribunal in 1983 and served until 1984. Lynn was appointed to the Cherokee Nation Supreme Court and was a justice from Jan. 1, 2015, until his passing.

As much as he enjoyed his professional career, Lynn would always say his greatest joys were his two daughters, Amber and Melanie. Lynn loved his family and his life revolved around them. He faithfully attended every one of his daughters' and granddaughters' events. He was their biggest cheerleader, no matter the sport or activity. He was a #girldad before it was ever popular. He instilled a love of Tahlequah in both of his daughters through outings and experiences that included Sunday drives, picnics, watching parades, and float trips.

As a child, Lynn's family took short trips to the Illinois River. Those camping trips turned into a lifelong love of the river and nature. It was these early trips that led to his tremendous love of traveling. Lynn traveled extensively with his wife and family throughout the U.S., Canada and Australia. He and Paula loved seeing the world and traveled to Egypt, Russia and throughout Europe. As much as Lynn loved traveling, he loved being with his family the most, especially as he showed them the world. He understood the saying "the family that plays together, stays together," and lived it daily. Because of this vision, Lynn purchased a place at Lake Tenkiller where he enjoyed spending time with his family throughout the past several decades. His lakehouse was one of his favorite places on earth.

As proud as Lynn was of his time at OU, he always felt a debt of gratitude to NSU and all that it gave him. He returned that gratitude by supporting NSU throughout his life. He and Paula were awarded the 2012 NSU Centurions for their tireless support.

Lynn understood the importance of hardwork and self-discipline. He believed we should all be the captain of our own ship. He loved history, math, learning and reading. His favorite book of all was the Bible and he read it daily. He was a shining example of God's love.

He is survived by a loving family which includes his wife, Paula Ann Burris of the home; his daughters, Amber George and husband Buck of Tahlequah, and Melanie Fields and husband Lonny of Tulsa; his twin brother, Lyle Burris of Muskogee; his sister, Robbie Nell and husband Charles Norman of Fallen, Nevada; his four granddaughters, Nikki Downs (Collin), Allison George, Milanne and Landrie Fields; and one great-grandchild, Jaxon Downs. He is also survived by many beloved nieces, nephews, close family friends and other relatives.

As much as we grieve this tremendous loss, we are comforted by the knowledge that our precious Dad is now rejoicing in heaven and seeing so many of his beloved family members. Lynn touched many lives and his legacy will live on through all those he inspired. "Well done my good and faithful servant" is what our sweet Dad heard on the evening of March 12.

In lieu of flowers, the family is requesting donations be made in his honor to Cherokee Nation Foundation (jr@cherokeenationafoundation.org or 918-931-2031) or to the NSU Foundation.
Published on March 16, 2020
To plant a tree in memory of Lynn Burris, please visit Tribute Store.

Plant a tree in memory
of Lynn

A place to share condolences and memories.
The guestbook expires on June 14, 2020.

Vernon Gragg
Back in my wild days Lynn was patient with me. I have never forgotten him. I retired in 2010 and 2014 made my way back to Tahlequah. He was an honest and decent man.
Pat Luce
My sincere sympathies to Lyle and all the Burris family.
Eugene and Lois Pickering
Our remembrance of the Illinois River with my first trout catch.
View all 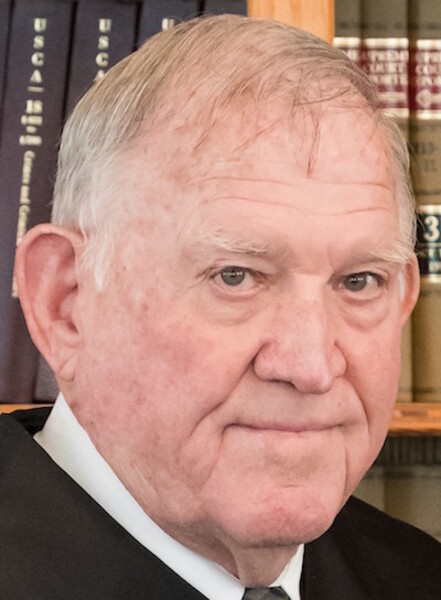