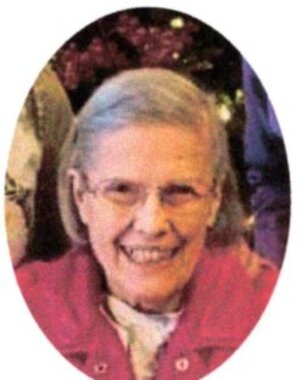 Back to Lorraine's story

TAHLEQUAH - Lorraine Jeanette (Ackley) Grimm, 91 years old, of Tahlequah, died on Friday, Jan. 17, 2020. At the time of her death, she was residing in The Health Care Center of Go Ye Village, Tahlequah, Oklahoma.

Lorraine was born on April 25, 1928, in Topeka, Kansas. She was the first and only child of Vira Grace (Craney) and Loren David Ackley. When Lorraine was two months old, the family moved to Herington, Kansas, were Lorraine grew up. Attending and participating in the Methodist Church was an important part of the family life. Music was a vital part of Lorraine's life. She began playing the violin at 6 and taking piano lessons when she was 7. During Lorraine's high school and adult years, she and her parents took an active part in the Gideons International organization.

After graduating from high school, Lorraine attended and graduated from Wheaton College in Wheaton, Illinois. At this time, her parents moved to Joliet, Illinois, to be closer to their daughter.

Following her college graduation, Lorraine became a loyal and active Wheaton Alumna. In January 1951, she began work for Gideons International in Chicago. A change of companies came January 1958, when she began to work for Scripture Press, Wheaton, Illinois. During her 40 years of working at Scripture Press, she held a number of responsible positions, including being the secretary to five Scripture Press presidents.

During her career years, she lived in Joliet, Illinois, in her parent's home. Lorraine and her parents were active in their church. Lorraine was an important part of the church music program. She sang solos, played the violin, and accompanied the choir on the piano. She was the church organist for 40 years and claimed that she wore out two organs.

Lorraine moved to Go Ye Village in September 2001. She became an active volunteer serving on different resident committees. She was also one of the volunteer piano and organ players for chapel services, as well as playing on a monthly basis for Special Care sing-time and Sunday afternoon service.

In October 2010, at the age of 82, Lorraine married Willis Grimm who was also a Go Ye Village resident. Willis died August 2013.

Lorraine lived out her life giving of her time, talent, and resources to furthering the gospel of Jesus Christ.

Lorraine will be buried in Peabody, Kansas. A memorial service is to be held at Go Ye Village; the date and time to be announced.

Plant a tree in memory
of Lorraine

A place to share condolences and memories.
The guestbook expires on April 20, 2020.