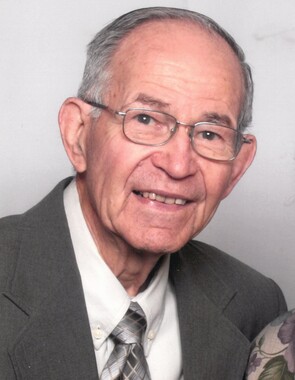 Back to Laverne's story

Funeral services for Laverne Steiner will be held on Wednesday, February 5th, 2020 at 2:00 PM at Reed-Culver Chapel. Chaplain Paul Tavener will be officiating. He will be laid to rest at Tahlequah City Cemetery. Online condolences for his family may be left at www.reedculver.com.

Laverne Steiner was born February 27, 1926, in Berne, IN, the son of Elam and Fanny (Zurcher) Steiner and died February 1, 2020, at the age of 93 years. His siblings were Lawrence (who died of diphtheria before Laverne's birth), Martin, Willard, and Ruth (Steiner) Sommer.
Laverne's mother-tongue was a Swiss dialect. He learned English upon entering elementary school. He graduated from Berne High School in Berne, Indiana. He then began ministry training at Fort Wayne Bible Institute, and he graduated from there with two degrees. He also graduated from Taylor University in Upland, Indiana.
While at Ft. Wayne Bible Institute, he met Letha Snyder, who later became his wife of just shy of 70 years until her recent death. She took pity on him in class when she saw he attended without paper or pencil. They sat near each other because their names followed each other alphabetically. He would jokingly say, "I didn't need to take notes in high school, so why should I need to now?"
The union was blessed with three daughters, Rita Steiner, Rosita (Steiner) Campbell, and Rachelle (Steiner) Nelson.
Laverne came to Oklahoma for a couple of summers to serve with The "Go Ye" Mission, teaching Vacation Bible Schools which would have been just 40 years after statehood. He then joined the Mission fulltime. He left for Ohio to "bring back a co-worker," and indeed he brought back his new bride, Letha in November 1949. The people in the church where he was ministering were quite surprised since they didn't know he had a girlfriend. He was obviously a private person! He recounted this surprise for decades with laughter and a twinkle in his eye.
While at The "Go Ye" Mission, he wore many hats: Scripture memory work in schools, Camp Look-Away, pastoring churches in both Arkansas and Oklahoma, teaching Bible, printing, and serving as Dean of Students at Markoma Bible Academy. Some areas he assisted in when needed were the cattle and hog farms at Markoma, electrical work for construction of Markoma's gym. He also frequently drove the bus for Markoma and kept the books at many basketball games. He knew the Illinois River like the back of his hand, after teaching himself to canoe; he took many groups from camp safely down that river. For many years he was Field Director and Vice President of the Mission as well as Secretary of the Mission's Board of Directors. He pastored at Liberty Grace Chapel for nearly 50 years, until at age 87 he realized he was unable to continue. His greatest desire in life was to faithfully preach the Word of God and live a godly life.
In June, 2014, he moved to Go Ye Village where he resided in the Med Center until his death.
He is preceded in death by his wife, Letha, his parents, Elam and Fanny Steiner, his brothers Lawrence, Martin, and Willard, as well
as his sister, Ruth.
Those left to cherish his memory include his three daughters and their families, Rita Steiner of Tahlequah, OK, Rosita Campbell and husband Mark of Tahlequah, OK, and Rachelle Nelson and husband Todd of Tulsa, OK. He lives on in his six grandchildren, Heather Argabright and husband Chris of Tulsa, OK, Beth Brandt and husband Will of Park Hill, OK, Scot Campbell and husband Brian Proud of Nashville, TN, Nathan Nelson of Tulsa,OK, Caleb Nelson and wife Michaela of Arlington, VA, and Larissa Hale and husband Anthony of Bartlesville, OK. He also leaves five great-grandchildren, Emily Argabright, Sara Argabright, and Caitlin Argabright all of Tulsa, OK, and Jude Brandt and Quin Brandt of Park Hill, OK, as well as many cousins and friends, too numerous to mention.
In lieu of flowers, the family asks that you consider celebrating Laverne's life with a show of support to Billy Graham Evangelistic Association at 1 Billy Graham Parkway, Charlotte, NC 28201-0001 or Samaritan's Purse at PO Box 3000, Boone, NC 28607, or check out their website at samaritanspurse.org.
Published on February 3, 2020
To send flowers to the family of Laverne Steiner, please visit Tribute Store.

Send flowers
in memory of Laverne

A place to share condolences and memories.
The guestbook expires on May 03, 2020.

Connie Stacy
What wonderful memories I have of Pastor Steiner at Liberty Grace Chapel!! We were such a close church family during those years. Pastor Steiner fed my soul with many sermons from God’s Word and provided pastoral care for all 3 of my children. He saw my youngest son receive Christ and baptized him into heavens cradle. Kenny is now a pastor as well and has joined the army of those who have and currently are working to win the lost to Jesus after being influenced by Pastor Steiner. God bless him and all his family. We will always love you!!
View all