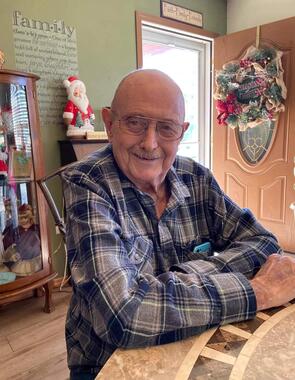 Back to James's story


His childhood was spent on the family farm, and by high school he had bought acreage and begun to prepare for a life of farming himself. When the decision was made in 1956 to move the family to Tahlequah in eastern Oklahoma, he sold the land. It later was found to have oil. If he'd stayed there he would have been wealthy--but he wouldn't have met the love of his life, Letitia Jones, and all his children think he came out the richer.


He graduated from Tahlequah High School in 1958, and went on to attend Northeastern State College, majoring in music education, playing trumpet in the band, and lending his beautiful baritone voice to various choirs. It was here that he met "Tish," the student accompanist for the vocal department. They married on Christmas Eve, 1959.


Jim was always interested in radio, in addition to his love for music, and started working at the local station while still in high school. After graduation from college he began a whirlwind series of jobs at radio stations in Oklahoma, Arkansas, and Missouri. Tish went along, keeping the house and caring for the eventual children. (He initially wanted "a dozen," but sensibly settled for three.) In 1967, after a number of moves, always lugging an old upright piano along with the kids, Tish apparently put her foot down and they resettled in Tahlequah, where they would remain.


Jim was a fixture at KTLQ-KEOK for years, as the lead announcer, program director, and engineer. He hired two of his college-aged children as part-time weekend announcers, as well. (Thanks for the job, Daddy.) For several years in the late 80s, he also worked at KBEZ in Tulsa, hosting the Big Band Saturday Night show.

He ended his work career at the place where, in many ways, his adult life began-at NSU, working in Special Projects, setting up sound/video systems for events, coming full circle so many years after performing there himself. He retired in 2002.


His other major love was flying. He earned his pilot's license, and then a commercial license, and flew commercial charter flights in the 70s and 80s. He flew regularly for the parachute championships then held in Tahlequah, taking the competitors up so they could float down. (He said he never understood why anyone would want to jump out of a perfectly good plane, but if they wanted to jump, he would get them up safely.) He also flew his family on occasional weekend jaunts, and once, when his children missed the bus for a high school band trip to Six Flags, flew them to Dallas, where they beat their classmates to the park by several minutes. (Thanks for the ride, Daddy.)


He was always an active and involved citizen, and served on the Tahlequah City Council from 1977-1985. He ran for mayor, but after a very narrow defeat (you missed your chance, Tahlequah) retired from politics, though not from his civic duty, serving as a poll worker for many years.


He was a lifelong Methodist, and a steadfast presence in the church choir, and a longtime Kiwanian, serving as a local officer, and division lieutenant governor twice.


He passed his love of music down to his children (and to one child, his trumpet), and though he rarely played himself after college, he would occasionally sit down and pound out one particular song on the old upright piano. The name of the song is lost to time but at least one of his daughters could hum it to you right now. His children were active in band and choir, and he was president of the Tahlequah High School Band Boosters while his children were in school.


He was a wonderful cook. Nobody could make gravy like Jim Masters. He and Tish made the dressing for the Methodist Church Thanksgiving dinner for years. He perfected the art of smoking cheese, turning out pounds of it each year for family and friends. No one else was ever allowed to carve the turkey, because no one could do it nearly as well as he.


He was an animal lover, and in his retirement rescued many stray cats and needy dogs.


But mostly, he was a loving husband, father, grandfather, and friend, and the rock of his family.

There will be a Life Celebration Dinner on February 1st, 12-3 pm, at Tahlequah First United Methodist Church Atrium. Please bring a food dish, memories, stories and pictures to share with his family and friends.

Memorial donations can be made to First United Methodist Church or Cancer Treatment Centers of America-Tulsa. Or why not simply rescue an animal or two yourself in his memory? He'd like that.
Published on January 8, 2020
To send flowers to the family of James Lee Masters, please visit Tribute Store.

Send flowers
in memory of James

A place to share condolences and memories.
The guestbook expires on April 07, 2020.

Regina Harris
I loved when he would be smoking different things and he and Tish surprised me with smoked cheese. Was so good. He always had a smile and kind words. Definitely made me laugh. Prayers and love to you all.
Sue Ann Brixey
Praying for Tish and his family.
I am so sorry. He really did fight a good fight. I'm sad that it's over. So glad you have wonderful memories. ❤
Elizabeth Northrup
I would like to extend my sympathy upon learning of his death. I went to school with his children, and played trumpet with one of them, Jim.
Mary Jo deSteiguer
My prayers will continue for this wonderful family. May God's Peace that passes all understanding give each of them comfort during this difficult time!
Vicki Ryals
Loved working with Jim. He was no nonsense and always made stuff work. I always requested his bread pudding and, of course, his smoked cheese. He was a brave, good-spirited man throughout the fight. Love you, Jim.
Shari Rogers
Thanks for all the love, sweet man. I miss you...
Misty, Katie, and Sarah Bug
I will always remember joking and cutting up with him. He always treated me like family. He will be missed. 😔
View all