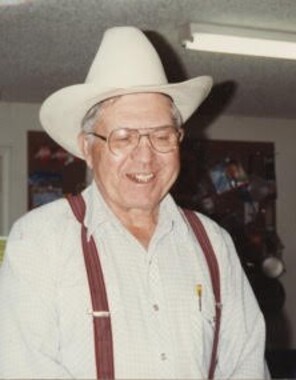 Back to Earl's story

Earl Ervin Ginn the son of Harschel and Jewel (Shockley) Ginn was born May 2, 1925, near Idabel and departed this life on February 2, 2020 in Claremore, Oklahoma at the age of 94 years and 9 months.

Earl enjoyed many things in life over his 94 years. He was a U.S. Marine and served in WWII where he was a mortar man in the artillary. He received several accommodations including a Purple with a gold star. He was proud of his service,and he took what he learned and put it to use in life. He worked for many years as dozer operator building roads until they finally made him the road boss. He did the work of seven men and built highways all over Oklahoma such as: Highway 51 between Wagoner and Hulbert, the Muskogee Turnpike and the Cimarron Turnpike. He raised Brahma Cattle and had a grand champion bloodline. He was very proud of his cattle. Earl enjoyed fishing and he always had a boat. He tied his own jigs and never really made one like another. He at one time had 600 buck tails hanging up to tie jigs with. Earl touched many lives over the years and will be dearly missed by all who knew and loved him.

He was preceded in death by his parents; his wife Imogene Ginn; his brother Cecil Ginn and his sister Linda Winters.

He is survived by a loving family which includes his sons Jerry Ginn and wife Vicki Kay of Albuquerque, NM and Kenneth Ginn and wife Barbara of Tahlequah; his grandchildren Andrea Scott and Asia Ginn and his great grandchildren Ethan Scott and Jude Scott. Several nieces, nephews, friends and other relatives also survive him

In lieu of flowers donations may be made to the Claremore Veterans Center.
Published on February 5, 2020
To send flowers to the family of Earl Ervin Ginn, please visit Tribute Store.

Send flowers
in memory of Earl

A place to share condolences and memories.
The guestbook expires on May 05, 2020.

Vicky Ballou
Earl was great friends with our dad, Martin, at the center. It was a pleasure to know him, he always had a handshake and a hug for us. Many hearts broke February 2nd. Thank you for sharing Earl with us
Robert ADRIAN
Earl was a tough customer but always honest and fair. It was good to know him and I appreciated the service he gave for his country.
View all